You may review the various image interpretation sets before doing some self training questions. 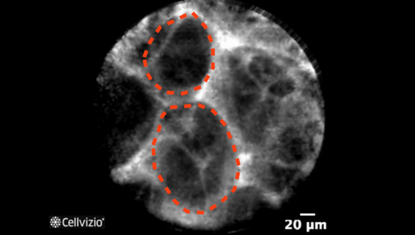 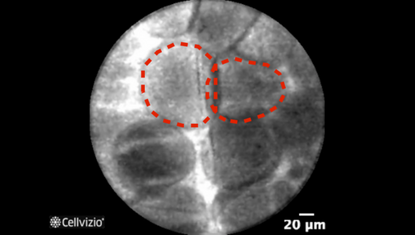 These criteria have been reported and assessed in clinical studies. Other criteria of interpretation might exist. Thus whenever possible, confirmatory evaluation via conventional histopathology or any other clinical information is recommended.

The pancreas is typically composed of dark-staining cells in clusters called acini, of lightly stained clusters of cells called islets of Langerhans, and of fat cells called adipocytes.

True pancreatic cysts are typically composed of a wall separating the inside of the cyst from the pancreatic parenchyma. The epithelial structure of the wall including its cytology help determine the nature of the cyst, notably for serous cystadenomas, IPMN, and mucinous cystadenomas, which count among the main types of cysts. Pseudocysts, on the contrary, are lined with scar or inflammatory tissue.

The AQ-Flex™ 19 Confocal Miniprobe™ has a depth of imaging located between 40 and 70 microns, and is introduced inside the cysts through the wall. It allows imaging the inner wall opposite the puncture and therefore can identify the epithelial structures of the wall and help differentiate them.

What happens in the normal pancreas?

Endomicroscopy revealed images of acini, which appear as dark lobular structures similar to «coffee beans». Adipocytes appear as grey oval structures, either round when seen separately or in a polygonal network when packed as clusters.

Ready to test your image interpretation for Pancreatic Cysts during EUS-FNA?