The bile duct is typically composed of a single cell layer of cuboidal/intestinal-type epithelium. The fixed depth of the CholangioFlex™ confocal miniprobe (40-70 microns), visualizes submucosal structures, unlike other parts of the GI tract.

3 basic elements have been identified in biliary endomicroscopy:

Klavan et al. (1) have shown that the microscopic and immunohistochemical analysis of the submucosa revealed many small sinuses supported by a complex collagen frame. There were small caliber blood vessels and the sinuses themselves were lined by cells expressing lymphatic endothelial markers. 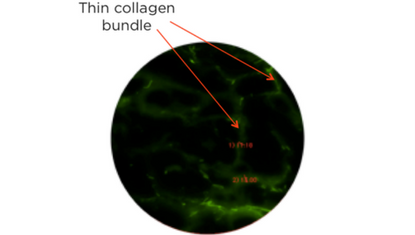 - Tissue is visualized here at a depth of 60 microns

- It has been processed using a frozen sectioning technique 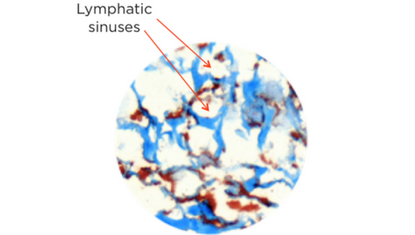 - They are lined and display immunohistologic traits of lymphatic sinuses

During biliary endomicroscopy, a reticular network of thin dark branching bands (< 20 microns) can be visualized. In addition, thin white bands can be coursing through the structure. Occasionally, they demonstrate flow with clear visualization of red blood cells (Meining et al. (2))

Normal bile duct is composed of a single cell-layer mucosa and an extensive submucosal sinus plexus. Initial difficulties explaining biliary pCLE have been resolved with an in depth histologic analysis. Klavan et al. have shown that biliary endomicroscopy identifies histologic elements of the submucosa primarily. This is especially true in normal bile duct that is pathologically unaltered. The submucosa in this case is composed of a complex collagen network. This creates an open sinus plexus, which is lined by cells expressing lymphatic endothelial makers. Small blood vessels are seen at various depths coursing through this layer.

Thick collagen bundles can be observed with fluorescence microscopy within the submucosal layer (Klavan et al. (1)). It is consistent with the fact that biliary tumors show desmoplasia, meaning groth of fibrous and connective tissue.

- Specimen is from the margin of a bile duct cancer

During biliary endomicroscopy we can see, among other criteria, thick black bands that are consistent with those findings and can help differentiate malignant from benign biliary strictures. Meining et al. discovered and validated other criteria appearing to characterize cholangiocarcinoma: thick white bands, dark clumps and epithelium.

The visualization of malignant bile duct with ex vivo fluorescence microscopy has shown thick collagen bundles probably due to desmoplasia recognized in this type of lesion and consistent with the thick black bands observed with endomicroscopy.

Biliary endomicroscopy of indeterminate strictures can improve our ability to diagnose malignancy where other modalities fail.

In addition, due to the very high negative predictive value, a normal endomicroscopic assessment essentially excludes cancer. Normal biliary endomicroscopy reveals a thin black reticular network, which has been correctly identified as a submucosal collagen network. It forms the backbone of a lymphatic sinus, which is seen on pCLE as a light fluorescent background.

Thickening of the collagen bundles can be consistent with desmoplasia and cancer. In addition, other criteria have been identified as criteria of interpretation for cholangiocarcinoma: thick white bands larger than 20 microns, epithelium and dark clumps.

Caillol et al. described new criteria of interpretation for inflammatory strictures with the Paris classification (3). Until now, the work of Klavan et al. has not focused on the correlation of those findings with histopathology.

This section has been prepared with the collaboration of Petros Benias, MD.

Ready to test your image interpretation for Biliary Strictures?